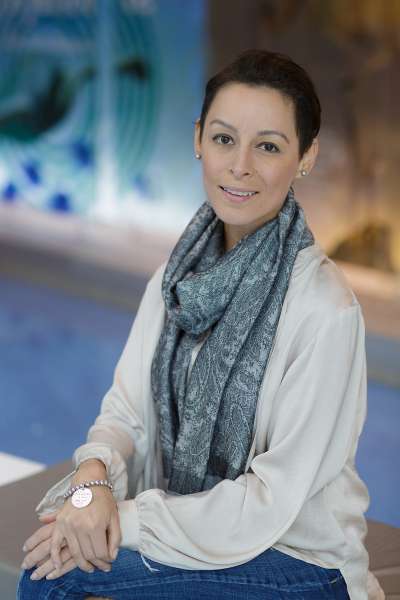 Out of the 20,000 genes a person has, Cristina Matos lucked out with a genetic mutation that would save her life.

In August 2014, Cristina Matos was diagnosed with a glioblastoma, a fatal brain cancer that spread to her spine.

She was in horrible pain, bed-ridden. By spring of 2015, she had gone through surgery, radiation and chemotherapy, but none of that had worked.

Cristina started having new symptoms, including seizures and severe back pain. She learned that the cancer had spread to her spine. She couldn’t walk anymore and was on multiple

medications to ease her pain.

Eventually, her doctors told her that she only had a few weeks before she would pass away. Cristina didn’t want to die, she had too much to lose and was determined to fight.

Hope knocked on her door in January 2016, when Cristina was referred to the University of Florida Health Shands Hospital by a nurse friend. Together, they were searching for

“I had a death sentence. I was lying in my bedroom waiting to die,” Cristina said. “I am so glad I listened to my heart, chose to fight and found this option. She is alive today because of what her DNA could tell us,” Tran said. “This is truly personalized medicine at its best.”

Nearly two years after being diagnosed, she arrived at the Preston A. Wells Jr. Center for Brain Tumor Therapy at the University of Florida where she met David Tran, M.D., a UF Health neuro-oncologist. He was able to run several unique tests to search for any gene mutation that would make Cristina a candidate for genomic therapy. And, he found something.

Cristina has a unique mutation, BRAF V600E, which is very rare in patients with glioblastoma. He was able to find an inhibitor and prescribed a single medicine to help Cristina.

Within days after stopping previous medications and starting the new, she began to feel positive effects, and within a week she was able to walk in heels and drive a car, two unthinkable

tasks considering how she felt when she arrived at UF Health.

“My pain is minimal at this point. It’s been almost two years since I met Dr. Tran, and life is good. I’m happy,” she said. Today, Cristina is traveling the world with her family, exercising at the gym almost daily, going out with friends and enjoying being a mom to her 5-year-old son.

Dr. Tran said her response to this medication is unprecedented. And she agrees.

“Each time I return to Gainesville for a check-up, I am anxious to see how my scans look,” she said. “Hearing that I am ok, and still responding to the medication…it feels amazing every time.”

Have you recently been diagnosed with a brain tumor? Do you have questions? This can be a scary time for you or your loved ones. Make sure you have all the facts and understand all of your options. The care team you select to be with you on this journey can make all the difference. We are here to provide you with an accurate and thorough diagnosis, educate you about all of your treatment options and offer the best possible care for you and your family. Learn more about obtaining a second opinion from a UF Health physician.